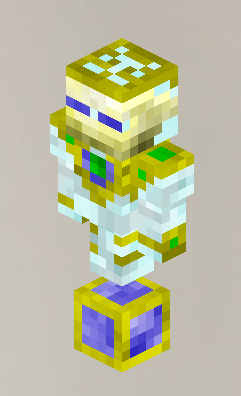 The Air Guardian is an intermediate-tier boss from Ars Magica 2.  As with other bosses from this mod, the Air Guardian is linked to an element and does not spawn naturally, but must be summoned by a ritual. The Air Guardian has 220 health points (110 hearts), and a magic level of 35 is recommended for this boss.

The Air Guardian is a being of wind, and makes heavy use of knockback attacks and breaks blocks. It would be foolish to go into battle with one without some form of falling protection. The Air Guardian is a powerful ranged caster, but it requires a great deal of focus to finish some of its spells.

A magic level of 35 or greater is recommended before considering a fight with the Air Guardian.

Before summoning the Air Guardian, ensure that you have protections against fall damage.  An easy way to do this is to write a simple spell: [Self] | [Feather Falling] This spell, when cast, will slow your fall and eliminate fall damage. If you are going this route, be prepared to cast this spell often!

Summoning the Air Guardian requires ground or a platform of elevation 150 or higher. The battle is easiest if you can locate a mountain where the elevation naturally reaches this height; otherwise, you will need to build a platform.  If you construct a platform, make sure to build at least a short wall around the edges to prevent knockback from sending you over the edge.

Once your area is ready, place 8 units of gold inlay in a square with a hollow center (pictured), then simply throw an Air Essence into the center of the inlays.

The Air Guardian's primary attack is a whirlwind with a strong knockback and knock up - the player will be launched about 10 blocks in the air on each hit.  This attack will deal a small amount of damage on hit, but the largest portion of its damage comes from fall damage received. The whirlwinds also seek out the player, making them difficult to avoid.

The Air Guardian also has a "charge attack," in which he summons several whirlwinds around himself.  As he moves towards the player, the player will be swept up in the whirlwinds, and after a set amount of time, launched significantly higher into the air (around 20 blocks).  This attack can be interrupted by dealing a significant amount of damage to the Air Guardian while he is charging.

Finally, the Air Guardian has the ability to teleport short distances. He will typically teleport behind the player as he begins his charge attack; he can also teleport vertically to catch up to the player if the player falls a long distance (or climbs).

At present, the Air Guardian's attacks have the ability to occasionally cause the player to drop an equipped piece of armor.  It is unknown whether this is a bug or an intended behavior. To negate this effect, leave a slot in your hotbar open for the duration of the fight, then as soon as your armor is removed, right-click on said armor (which should now be in your inventory) for quick reapplication.

The simplest way to defeat the Air Guardian is to spam a projectile damage spell (Lightning works well). Keep your Feather Falling spell on a separate, adjacent slot in the hotbar, so that as you are knocked into the air you can quickly switch to this spell and cast it. This will protect you from most of the damage the boss puts out.

An alternate strategy involves constructing an enclosed "arena" before summoning the boss.  If the ceiling is built only 3 or 4 blocks high, the player cannot be launched high into the air, and if the walls are enclosed, the player cannot be knocked off the platform.  This requires more setup work, but is perhaps the safest way to challenge the boss.

Leaving the Air Guardian in a enclosed area for a short amount of time will cause the Air guardian to get "bored" He will then proceed to destroy any blocks above him in a 5x5 radius.

I've put a Cobweb in the empty block in the middle of the summoning block.This way the Air Essence can stay there long enough to summon the Guardian and afterwards he can drop through (I've also made a 3x3 room for the Summoning platform, with a shaft to drop the essence in). This way you can trap him in a 1x1x3 room. So far he didn't break anything apart, probably because there is sky above him. Not sure how to kill him and keep the loot yet, but you have him trapped he won't attack you. ( http://www.picpaste.com/Air_trap-D6ePkwRV.jpg )

Another strategy is to build a small 5x5x2 room with the inlay ring in the center and the hole in the floor having a block under it. This immobilizes the guardian, and makes this fight so much easier that it can easily be accomplished in level 25. Suggested equipment: lightning damage spell and two greater mana potions.

If you like boring fights you can put a solid block on top of the middle block in every row of inlays and the on top of the air in the middle of your square you put another solid block. If you then make a ceiling this will prevent you from taking any damage at all and completely immobilizing the boss.

Upon defeating the Air Guardian, the player is rewarded with a green Infinity Orb.  Typically, the boss will drop at least one Air Element as well, allowing you to summon him again immediately if you prefer.

The Air Guardian also has a low chance of droping the "cube" he is riding on, also known as an Air Sled. Right-clicking with the cube in your hand will summon in a ridable entity, and right-clicking on the entity allows you to ride it.  It is not as precise as creative-mode flying, but it does not require mana or other fuel costs  Shift-right-click on the sled to return it to your inventory.

The Air Guardian appears to be a genie of some sort.