The Fire Guardian is a boss mob that has an appearance of a towering humanoid that is entirely composed of flames. It is one of the many elemental guardians that can be encountered late game, and like the others must be summoned through a specific ritual.

"The Fire Guardian is a living inferno from the depths of the nether. Be warned though, it does not take kindly to those that try to bring water to its domain. Be prepared for a fight!"

First, in the Nether, build a 3x3 Obsidian frame, coal block in the center with gold inlay on the top. Then, place a Lava Source (or a Coal Block in later versions) in the center of the Obsidian Ring. Finally, Throw 1 water essences in the lava (or on the coal block) to summon the Fire Guardian.

The Fire Guardian is well known for being one of the most difficult bosses to defeat. The guardian is formidable as it has 250 health points, which is equivalent to 125 hearts and deals strong fire damage.

The Fire Guardian's primary attacks are projectile-based fire spells and, if the player gets close, melee attacks. The guardian can also breathe fire, which can be avoided due to its short range. The least common, but deadly attack is similar to the Firestorm Spell that has a life drain effect.

When the Fire Guardian is spawned, his first phase of attacks is a firestorm that heals the Guardian if he is in it and an Area-of-Effect fire attack. He will jump in and out of the ground, making him hard to hit. In phase two, he uses a mix of flamethrower attacks and also a fireball, which is targeted at the player.

It is recommended that the player is at least be a magic level of at least 90 or higher before taking on the Flame Guardian. Also, the player should equip themselves in Earth Armor or Battlemage Armor for increased survivability. One tactic to kill it is to use a beam lightning spell and a fire-resistance potion so that you can avoid taking fire damage entirely. Be well prepared with food to replenish your hunger during the fight.

A good spell to use against the guardian- 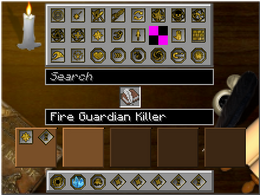 This will hold the guardian in place under the blizzard which will damage him consistently. silence will stop him from casting the firestorm and healing. simply cast the spell on him and fly out of his range, and watch his health go down.

Like the other high-tier elemental guardians, the Fire Guardian will drop an infinity orb (red) and, occasionally, fire essence. The Guardian also has a low chance to drop a piece of headgear called the Antenna of the Fire Guardian. This grants the player immunity to fire and lava, an effect similar to consuming a potion of fire resistance.

Important note: The fire guardian will melt any and all armor you bring to the fight.