Moonstones are minerals which can be obtained by mining Moonstone Ore, and can be crafted into Moonstone Blocks. They are used in the crafting of the Sigil of Lunar Tides, Crystal Phylacteries and spells. Due to the way in which Moonstone Ore occurs, Moonstone can be considered a rare resource, in some cases rarer than diamond.

If one were to look up at the sky at the right time of the night, one may see a meteor descending from the sky. These meteors contain the rare mineral Moonstone. Where exactly these meteors came from, nobody knows, but the magical properties of Moonstone far excel anything else found in the world. Studies have shown that the meteors fall more and more often as the moon waxes full, then decreases again as it wanes back to new.

Unlike most other mineral ores which can be found by mining into the depths of the underground, Moonstone ore is found when a Moonstone Meteor strikes the surface at night. These moonstone meteors create small, almost unnoticable craters upon collision with the ground, along with a sudden explosion sound which may be heard more than 100 blocks away. Since Moonstone Meteors fall from the sky, these makes them renewable in a way, although the moonstone meteors are reasonably rare and difficult to locate.

Moonstone Ore can only be mined with a Iron-tier pickaxe or higher to yield one Moonstone drop, although the number may increase when the ore is mined with a Fortune Pickaxe.

Although Moonstone may be rarer than Diamond, it does not have as many uses. Moonstone, in its raw form, may be used to craft Crystal Phylacteries for summon spells, and Moonstone blocks for the crafting of the Sigil of the Lunar Tides, used for attracting Moonstone Meteors for easy collection. In the outdated version 1.1.0 (current version is 1.1.1c), Moonstone was used for crafting most of the other Sigils, although this has been changed since 1.1.1b.

The uses for raw Moonstone are: 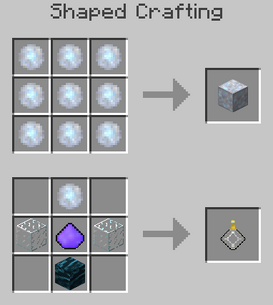 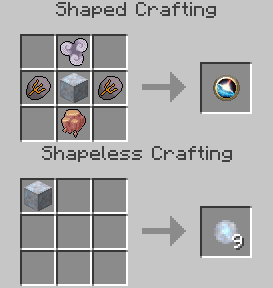 Although Moonstone not very useful in regular crafting recipes, it has a few important uses in the crafting of spells.