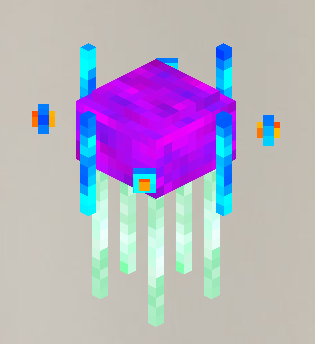 The Water Guardian is one of Ars Magica 2's bosses. Similar to all other bosses from this mod, the Water Guardian is linked to an element and does not spawn naturally, but must be summoned by a ritual. It is one of the first bosses the player will fight, being the weakest of all the bosses, only requiring a low magic level 10 for combat. It has 75 health points, or 37.5 hearts of health.

The guardian of water is a unique being. It is always in a state of fluidity, making it able to occasionally shrug off attacks. It is a trickster as well, flowing into copies of itself and attacking from ambush if one is fooled by the decoy.

Summoned by throwing a Bucket of Water and a Boat into a ring of Redstone Inlays (3x3). This can only be done in an ocean or river biome, and only works during rain or a thunderstorm.

Note- Can't be in a combo of the biome.

For some strange reason, the water guardian is not affected by ice spells.

Attacks by casting watery grave, a projectile spell, and splitting into clones that hurt you if you attack the wrong one.

Recommended strategy, build a room above an ocean to summon this. This mob is 1.6 blocks high.

The Water Guardian is extremely vulnerable to Lightning damage, receiving double damage from all sources of this type. For example, a Projectile-Wall-Touch-Lightning Damage will shred the guardian apart, doing around 30 hearts per tick of damage, more than enough to end the fight within seconds.

The Water Guardian has 4 attacks: throw a single water ball, clone himself, spin with 1.5 block range, spin and shoot many small water balls, he also give you an effect that you automatically fall in water on the ground and can't swim up.

The Water Guardian's base mob model is a Blaze.

Like any of the other beginniner bosses, it will drop a blue infinity orb when you kill it and 1 up to 4 essence of its type.

The Water Guardian also has a small chance of dropping the orbs that surround it, also known as the Water Orbs. These water orbs can be worn as leg armour, and when worn, grant the player infinite breath underwater and prevents the player from being pushed around by water currents. These water orbs are infinite, and do not offer the player any armour points.